Thanks to strong winds, electricity production in Germany achieved a new record share of nearly 65 percent renewables last week, research institute Fraunhofer ISE has found. Wind turbines, solar panels and other renewable energy sources contributed 64.8 percent to the country’s net power production between March 4 and 10, the institute says in a press release. Wind power turbines alone reached the new record share of 48.4 percent of power production in Europe’s biggest economy. “These figures show that the envisaged goal [of the German government] of 65 percent renewables by 2030 is technically feasible,” researcher Bruno Burger said, adding that the goal now was to sustain a high renewables share for an entire year. According to Fraunhofer, lignite and hard coal plants only ran at minimum output during that week, while nuclear plants were curtailed during the night. The share of lignite in the power production mix fell to 12 percent, half of its average share in 2018. While the share of renewables overall reached 40.2 percent in 2018, it stood at 43.3 percent after the first ten weeks of 2019, Fraunhofer added.

The German government coalition has increased its 2030 goal from 55 to 65 percent of power consumption to compensate for the decommissioning of nuclear and coal power capacity. The biggest challenges to achieve this aim currently are the sluggish expansion of the country’s power grid and the uncertain growth rate of renewables, as new wind power projects are met with increasing resistance and many older installations could be taken off the grid as they become less profitable once their 20-year guaranteed remuneration period ends. 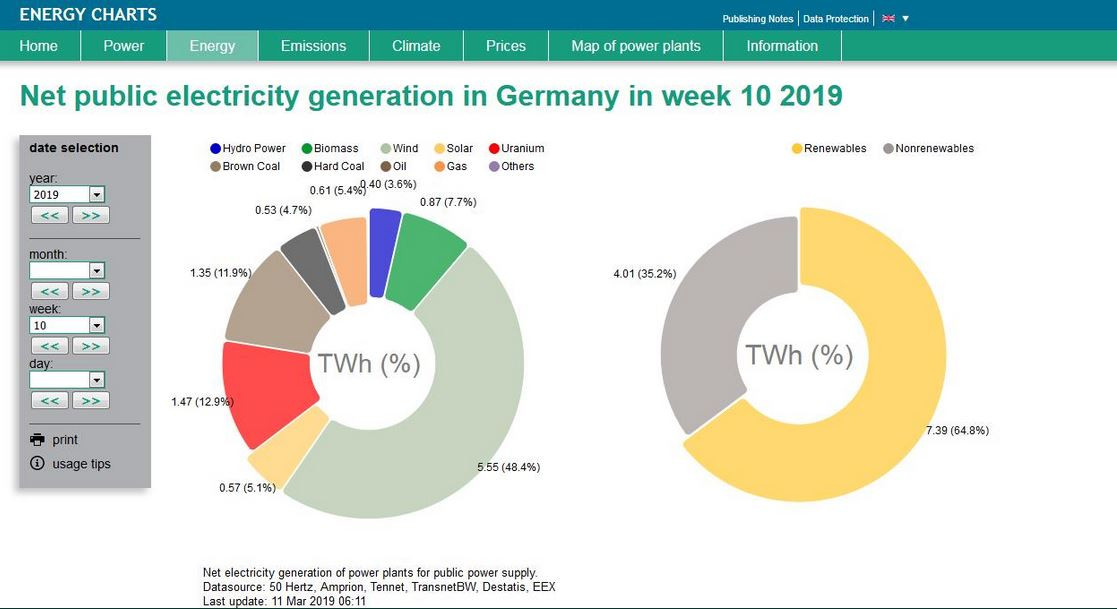