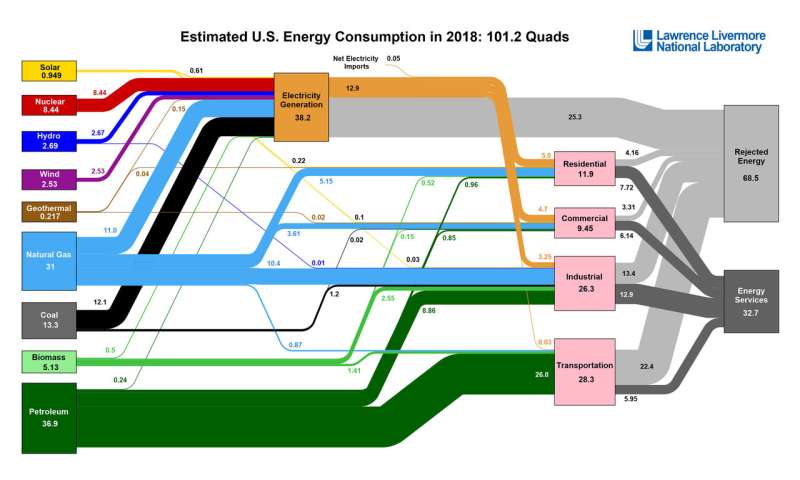 Americans used more energy in 2018 than in any other year, according to the most recent energy flow charts released by Lawrence Livermore National Laboratory (LLNL). Overall total energy consumption rose to 101.2 quadrillion BTU (or “quads”). The prior record, set in 2007, was 101.0 quads. Energy use went up by 3.6 percent from 2017, which also is the largest annual increase since 2010.

Each year, the Laboratory releases energy flow charts that illustrate the nation’s consumption and use of energy. Americans used 3.5 quads (quadrillion BTU) more in 2018 than in 2017. A BTU, or British Thermal Unit, is a unit of measurement for energy; 3,400 BTUs is equivalent to about 1 kilowatt-hour.

The largest increases in energy supply came from natural gas, wind and solar energy. In 2018, wind use was up 0.18 quads (7.6 percent) and solar was up 0.18 quads (22 percent). Over the last decade (between 2008 and 2018), total renewable energy production has doubled, including a five-fold increase in wind power and a 48-fold increase in solar. Wind and solar combined now produce more electricity than hydroelectric power, which dominated renewable energy for decades.

Supply from natural gas increased by 3 quadrillion BTU, from 28 in 2017 to 31 in 2018, a 10.7 percent increase. “This reflects a significant increase to electricity generation, where gas continues to displace coal,” Simon said. “2018 had a hotter summer than 2017, requiring more electricity for air conditioning, driving up gas consumption. It also had a colder winter, which increased gas demand in the residential sector.”

Coal consumption continued to fall in 2018 by 0.7 quads or 5 percent, due mainly to increases in natural gas and renewable use.

Biomass use was up by about 0.2 quads or 5 percent from 2017 levels. Most of the increase in biomass use was in the residential sector for heating. Biofuel use in transportation, which is dominated by ethanol use in gasoline, was essentially unchanged since 2017.

Petroleum use (oil) was up 0.7 quads or 2 percent, but barely budged in the dominant transportation sector. However, it rose substantially in the industrial sector. Although data are not yet available on specific uses within the sector, “it is likely the result of increased manufacturing, petrochemical production and refining of fuel for export,” Simon said.

All energy use results in some losses, shown on the charts as rejected energy. This energy most often takes the form of waste heat, such as the warm exhaust from automobiles and furnaces. The efficiency of the nation’s cars, lightbulbs and factories determines how much waste heat is produced and how much fuel and electricity can be put to productive use.