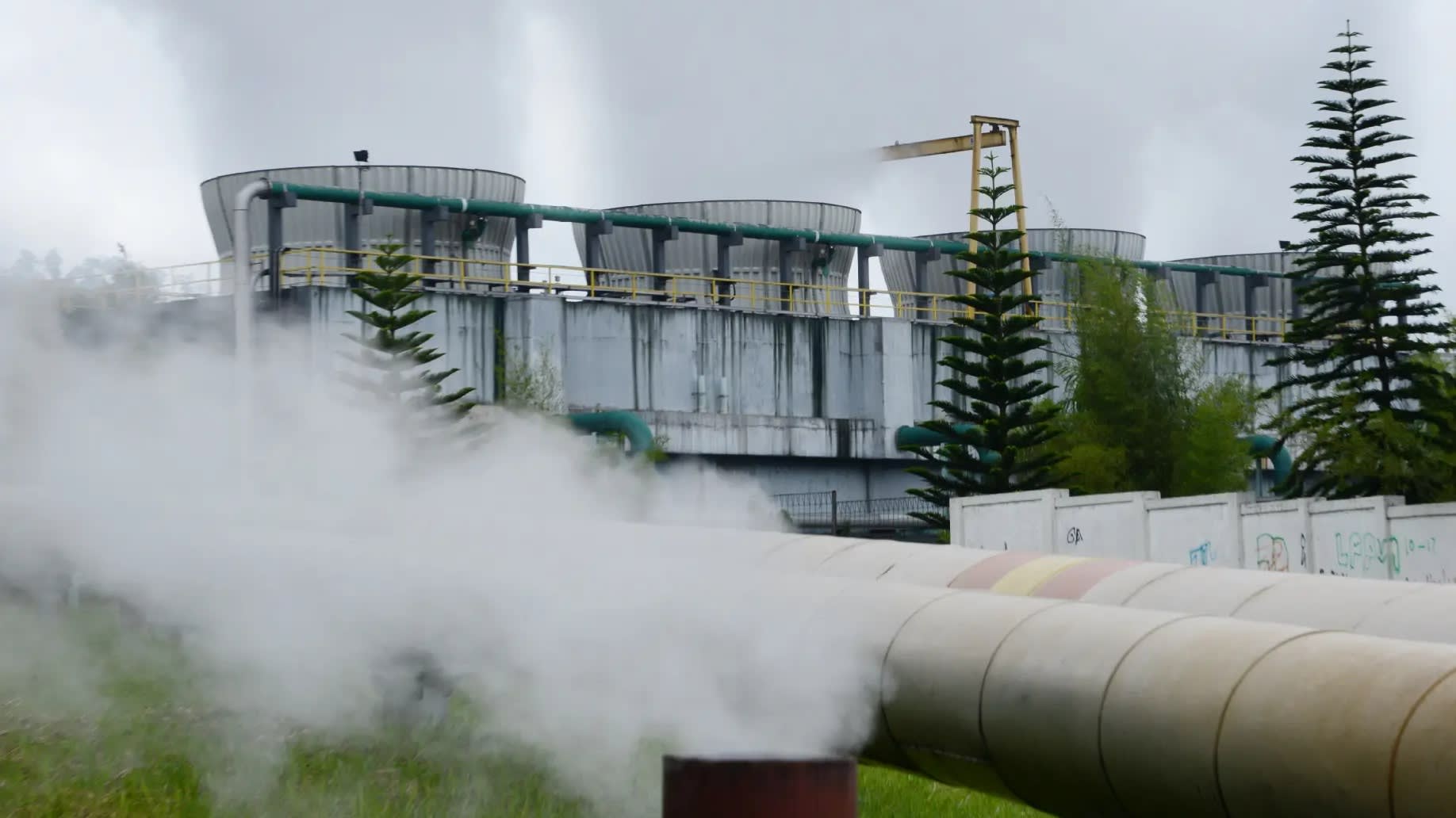 A geothermal plant near Indonesia’s Kamojang volcano in West Java.

In Indonesia, StarEnergy looks to capitalize on native geothermal resources, made possible by the more than 100 active volcanoes that dot the island nation. At one project in West Java, steam produced by Mt. Salak passes through a pipeline to rotate power turbines. The only emissions at the plant are the milky white water vapors released by the plant’s several chimneys.

StarEnergy is a subsidiary of Indonesian petrochemical conglomerate Barito Pacific. Through 2018, StarEnergy purchased assets from U.S.-based Chevron, including the Salak plant. StarEnergy also runs the Wayang Windu geothermal plant, one of the biggest in Indonesia. The company is capable of producing 875,000 kW of power, and plans to lift capacity above 1 million kW.

Indonesia’s state-run utility PLN will likewise tap into the country’s geothermal potential — second in the world only to the U.S. — to ease the domestic energy squeeze. PLN is buying up green power generated by independent players, such as the Sarulla geothermal power plant in Sumatra. An international consortium controlling Sarulla, formed in part by Japanese trading house Itochu and Kyushu Electric Power, signed a 30-year power purchase agreement with PLN.

Thai energy company Banpu derives about 90% of revenue from the coal business, but seeks to diversify its earnings away from the fuel source and its price volatility. “We will integrate coal with renewable energy with the aim of maximizing profit and meeting social needs,” said CEO Somruedee Chaimongkol.

Last year, Banpu installed 150,000 kW worth of solar generators. According to estimates, Southeast Asia will generate 30% more solar energy than Japan due to the region’s abundant sunshine. Banpu will also switch on a megasolar project in Japan’s Fukushima Prefecture later this year.

In Vietnam, Banpu plans to construct an 80,000 kW wind farm in the southern province of Soc Trang by 2021. The project is forecast to cost 13 billion baht ($408 million).

Vietnam’s long coastline makes it one of the most suitable places for wind energy in Southeast Asia. Last November, the government boosted feed-in tariffs for wind power to support the industry’s development.

Malaysian state-backed utility Tenaga Nasional is investing in solar power. Last November, it began commercial operations at a 50,000 kW plant near the capital Kuala Lumpur, one of the largest solar facilities in the nation. The Malaysian government expects renewables to occupy 20% of the country’s energy mix in 2025.

Southeast Asia’s energy demand is on track to rise by 70% in 2030 from 2017. Additional fossil fuel plants will figure greatly in bridging the gap. Indonesia implemented measures that lower the cost of purchasing coal, a move that threatens to slow the penetration of sustainable energy.

In 2017, a combined 51.14 million kW of electricity was generated from renewables in Indonesia, Thailand, Vietnam, Malaysia and the Philippines, the International Renewable Energy Agency estimates. That represents a 130% jump from 2007 to an output roughly equivalent to 50 nuclear reactors. Power production is expected to more than triple to 161.8 million kW by 2025.

The type of principal renewable energy source differs by country. Like Indonesia, the Philippines is home to many active volcanoes, and the two nations each produce nearly 2 million kW in geothermal power.

Thailand is the region’s solar energy leader, with 2.7 million kW worth of solar generators in operation in 2017. The output has increased 84-fold since 2007.

But Vietnam outpaces the other four countries in renewable power generation capacity, which amounts to 18.16 million kW. But most of that energy comes from hydroelectricity, and the country has only begun introducing solar and wind power.

In all five countries, hydroelectricity is responsible for 70% of the renewable power production. Some have faulted hydropower for contributing to environmental damage, given how dam construction alters the natural landscape. Safety has also emerged as an issue after a partially finished hydroelectric dam collapsed last year in Laos, causing deadly flooding.