Chinese Solar Shines at Home and on the Road 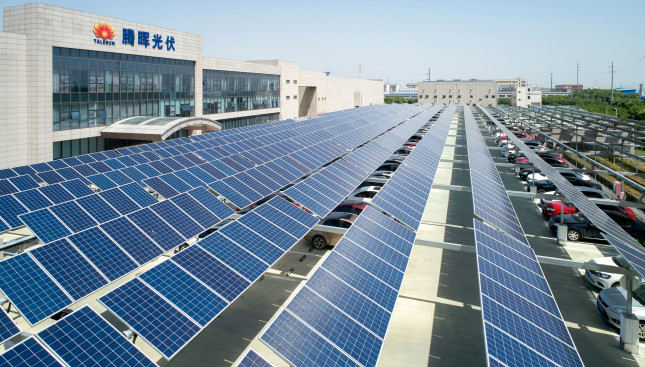 For solar industry professionals in China, May 31, 2018, is a day that will live in infamy. At the beginning of 2018, Chinese domestic solar developers were riding a high after reaching a record 53 GW of newly installed solar capacity the previous year. Most sources projected this breakneck pace of new solar construction would continue through 2018. On June 1, 2018, however, the National Development and Reform Commission, Ministry of Finance, and National Energy Agency announced a new policy to lower the solar feed-in-tariff, halt subsidized utility-scale development, and implement a quota for distributed projects. Industry professionals refer to the infamous policy as “531” for May 31, 2018, the day that the solar industry ground to a temporary halt or “freezing point.”

Over the following six months, solar component prices dropped to record lows, both utility-scale and distributed projects stalled, and lower tier companies collapsed. However, the government intentions were clear—decrease reliance on subsidies, improve product quality, and complete the shift towards marketization. Despite the setbacks, the Chinese solar industry succeeded in installing 44 GW of new capacity by the end of 2018 (see Figure 1).

Over the year, another critical trend emerged—the rate of Chinese solar exports started climbing. After years of success at home, Chinese developers and manufacturers are noticing the enormous market potential of the global solar market and are prepared to build a definite competitive edge. Accelerating their interest is China’s Belt and Road Initiative (BRI) an ambitious transcontinental effort to strengthen infrastructure, trade, and investment links between China and some 65 other countries that account for more than 30 percent of global GDP, 62 percent of population, and 75 percent of known energy reserves. 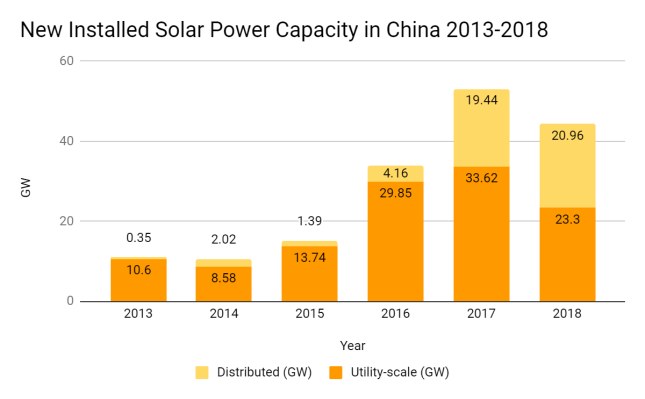 The Chinese Solar Industry Radiates Out

China’s solar industry first foray abroad was in the early 2000s. It was attracted to bourgeoning overseas markets driven by generous subsidy and incentive programs. In 2008, China was the largest solar manufacturer in the world and exported 95 percent of what it produced. However, in the aftermath of the global financial crisis, the solar market contracted and the European Union and the United States imposed anti-dumping measures. The Chinese government, to aid its fledgling solar industry, stimulated domestic demand through poverty alleviation and subsidy programs, and paved the way for rapid expansion. While export volumes fell, domestic solar installations skyrocketed. Even before the 531 policy hit the brakes on solar subsidies, Chinese solar component exports started increasing in the first quarter of 2018, and by September were up 66 percent from the third quarter in 2017.

Historically, trade protectionism has had dramatic consequences for the Chinese solar industry, but in 2018, it encountered a new market landscape. Due to the dispersion of global solar demand and steep price declines following 531, the high U.S. and Indian tariffs had minimum impact on Chinese solar exports. While Chinese solar exports to the United States decreased by over 80 percent, they surged across a more diverse consumer base in 2018, increasing in the European Union,  the Middle East and Latin America. This trend reflects how developing and developed nations are looking to solar as one way to meet renewable energy targets under the Paris Agreement.

BRI, with a key focus on energy infrastructure, is another potential avenue for increased solar exports. The majority of energy development in BRI countries remains in fossil fuels, but many have ample sunlight and would be good candidates for China’s “solar diplomacy.” The Chinese government, nongovernmental organizations, and the solar industry recognize the market potential and are working to develop creative financing mechanisms to promote “green” development. From their perspective, BRI is an important opportunity to bring solar to the world, but the Guidelines for Promoting Green Belt and Road the government released in May 2017, is still an unproven concept.

“Currently, China has little to show for keeping its promise of greening the BRI, but perhaps engagement in Cambodia signals a change,” comments Brian Eyler from Stimson Institute and author of the new book Last Days of the Mighty Mekong. Eyler explains that “In January this year, Cambodia’s Prime Minister Hun Sen traveled to Beijing for a state visit where he met with Huaneng Hydrolancang, one of China’s largest builders of hydropower projects abroad. But instead of inking new deals for dams in Cambodia, the two parties agreed to develop utility scale solar projects, which makes sense since Cambodia has ample sunlight to develop into the ‘Solar Belt of Southeast Asia.’”

While the outlook for the overseas solar market is optimistic, Chinese officials still recognize the need for a healthy domestic market to weather global influences and meet carbon emissions targets. The government views solar as a critical element in the low-carbon energy transition, to alleviate poverty, and stimulate the economy. According to the China Renewable Energy Outlook 2018, under a Stated Policies Scenario, solar installations could average between 80-160 GW per year to reach a total of 1494 GW by 2035. Thus, as the overseas market grows, China’s domestic market is by no means waning.

What makes developing a domestic solar policy hard is finding the balance between encouraging growth while solving existing issues around solar development. China’s domestic solar market expanded so quickly and surpassed the original solar development target under the 13th Five Year Plan by 65 percent by the end of 2018. At the same time, the subsidy gap reached around 120 billion yuan and many solar developers’ subsidy payments were two, or even three, years behind schedule. Previous domestic policies accelerated solar capacity development but lacked a strategic approach that was both financially and physically viable.

The issue of curtailment, or wasted energy production, continues to be a significant challenge in renewable energy development. However, the government is working to solve the problem through power sector reforms, and recently, the legal system. For the first time, a public interest case involving wind and solar curtailment made it to a district court in Gansu in January 2019. The Gansu branch of State Grid could be held liable for environmental damage totaling 1.7 billion yuan from coal-fired power that could have been prevented had more renewables made it on the grid. In 2018, China’s National Development and Reform Commission and National Energy Administration released a statement that solar curtailment would be less than 5 percent during 2019–2020, down from as high as 19 percent in 2016 in the northwestern provinces.

The National Development and Reform Commission has yet to release the solar development policy for 2019. The subsidies proposed for 2019 are significantly lower than the previous generous prices (see Figure 2). From the view of the government, subsidy limitations and stricter quotas could incentivize the solar industry to improve technology, quality, and efficiency to help solar prices reach grid parity, or are cost competitive with conventional energy sources, as soon as 2020. 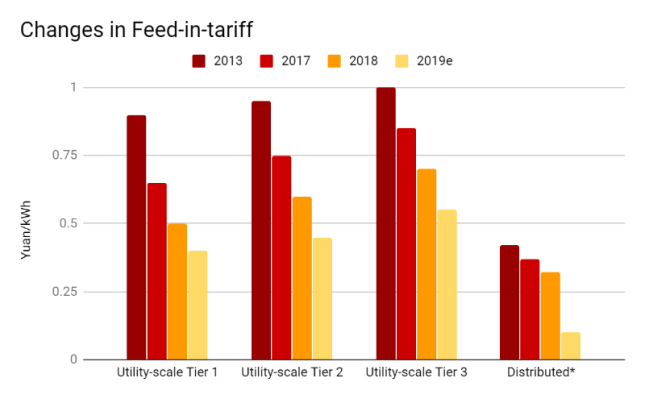 A Bright Future for Solar

China’s solar industry faced multiple setbacks as a result of “531,” but the overall trend line for the future is positive. Chinese companies not only recognize the vast domestic potential for renewable energy but a return to international market opportunities as well. As solar prices decline, technology advances, and efficiency improves, solar will become a more feasible and lucrative investment. In the next few decades, solar will surpass conventional fuels as a primary energy source, and according to the Energy Transition Outlook, by 2050, solar power will make up 40 percent of world electricity generation. China is poised to lead this energy transition but must work diligently to maintain a global competitive edge while managing stable growth at home.